Yes, Virginia, a man can have a Jezebel spirit.

Many of us who were raised in a House of Jezebel experience, especially in cases when our caregivers were female Jezebels may wish to forget about our childhoods and just move on and into adulthood forgetting the past altogether. But unfortunately, it’s not always that simple. Unless you live in a monastery, you may soon find yourself prey to another type of Jezebel. Unfortunately, this one comes in the form of a love interest associated with the MALE JEZEBEL personality. If you are unsure of what one looks like, here is a sampling of 18 characteristics shared via a 2011 blog post on The Vintage Soul entitled The Charismatic Male Jezebel: Conquest for Romance and Assimilation:

To avoid such a predicament, it’s imperative that we face the shadows of our past and properly analyze the hurts and harms that we’ve endured. When we don’t, we cheat ourselves of a level of happiness and contentment that can’t be acquired without having done so. In other words, within the fabric of our being are remnants of our encounters with any and all past Jezebels. It shows up in how we live our lives, how we process emotions, how we carry ourselves and more. These unconscious behaviors are easily spotted by “con artists” such as the male Jezebel. As a result, we find ourselves in the same (or a similar) predicament as our youth. Without realizing it, we’ve unknowingly brought our childhoods into our adulthood via a “bad” relationship, marriage, or parenthood.

Am I saying that all male Jezebels are “con artists”? Not necessarily, some of them are “wounded souls” who have yet to heal, while others are loud, charismatic “drama kings.” Either way, these males have likely experienced some level of neglect or abuse in their own childhoods often at the hands of their mother who was likely also a female Jezebel. Such males usually have never – and will never – “face their shadows” and come to terms with whatever may have happened to them. [ctt template=”3″ link=”KrH7f” via=”yes” ]As a result, these boys physically grown into adult male Jezebels who are still wounded and emotionally insecure. #thojbook [/ctt] This does not make for a stable relationship! To be honest, I’m speaking from experience as I found myself in a male Jezebel “relationship” several years back but not before I became pregnant. Back then, I knew but ignored the fact that back in the day, I knew that this guy was not the marrying type because of one major flaw – his temper. Although I have never seem his temper, I ASS-UME (

) reconnecting with him after ten years of little to no contact that he had grown up. But boy, was I wrong? In the past few years, I’ve gotten a first-hand glimpse of everything that I heard him complain about all of those years prior to.

When we were in constant contact, I had never met or introduced to his family or friends. So in our “surface-level” conversations whenever he reference his ex-wife, his “adult” children, his “siblings” and even past romantic relationships, I was only getting one side of the story – his side. However, once I was on the other side of the fence, I got a first-hand experience to see who he really is and it finally started to make sense. For over a decade, we were friends but it was a surface-level friendship. We were not lovers and the idea at that time totally repulsed me. Back then, we were in contact because we were on the same low-vibrational frequency. But at the same time when he reentered my life over twelve years later, I had yet to face my own shadows, especially those associated with my childhood. As a result, without realized it, I turned around and allowed a new Jezebel into my life and some of the qualities listed above I’ve personally experienced from my Jezebel. Now let me stop right and add, I don’t say/share any of this for pity. On the other hand, I’m sharing my experience as a forewarning to other women. But hey, you don’t have to listen to me, hear out husband and wife duo – Alfred Edmond, Jr. and Zara Green as they explain it in their book, Living in the Grown Zone: A No-Nonsense Guide to Making Healthy Decisions in the Quest for Loving Romantic Relationships of Honor, Esteem and Respect:

If you are serious abut living in the Grown Zone – which means you are committed to better choices, more self-love, and healthier relationships – you must recognize and steer clear of drama kings and queens (actually drama addicts) at all costs. Do not try to cure them or fix them, or help them solve their problems. You won’t pull them out of the drama; they’ll just suck you in. Just maintain as much distance as possible, and whatever you do, do not become intimate with them or allow them to become involved in your life beyond mere acquaintance….Drama kings and queens are vampires.” (p. 80, emphasis added).

So does that mean if you do attract a male Jezebel, then there’s something wrong with you? Well if you’re able to “dismiss him” or “cut him loose” early on unscathed, then congrats! 👏 But be prepared for the next one…. However, if – for even a millisecond that you find yourself “falling” for his charisma, then yes, you do have an underlying issue that needs to be unearthed, examined, and learned from. It really boils down to how you view yourself. Again from the book Living in the Grown Zone, it emphasizes:

It is impossible to determine where you need to go in relationships, without continuously learning and unconditionally accepting who you are at all times. Self love is your compass; without it, you are lost.” (p. 92)

Regardless if the people in our lives are there for a season, a reason, or for a lifetime, each of them serves as a mirror – a reflection – of who we are and their purpose is to expose us to ourselves. Such individuals can show us parts of ourselves that we are blinded too. So to avoid a male Jezebel, you must put in the “inner work”. Sista, take off that mask of what you think love such be and take the batteries out of your “biological clock” because its past time to truly look at YOU and start truly loving yourself before someone – like a male Jezebel – comes in “pretending” to do so. Basically, you must love yourself enough to either not attract a male Jezebel in the first place or you must be so keenly aware of such a man that you can discern him in a city-wide power outage. Either way, I’ve learned my lesson THE HARD WAY and I’m now choosing to live in the Grown Zone and I hope you will too. 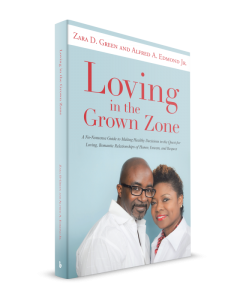 Loving in the Grown Zone

A No-Nonsense Guide to Making Healthy Decisions in the Quest for Loving Romantic Relationships of Honor, Esteem and Respect

Available in Paperback, Hardcover, and Kindle via Amazon.com